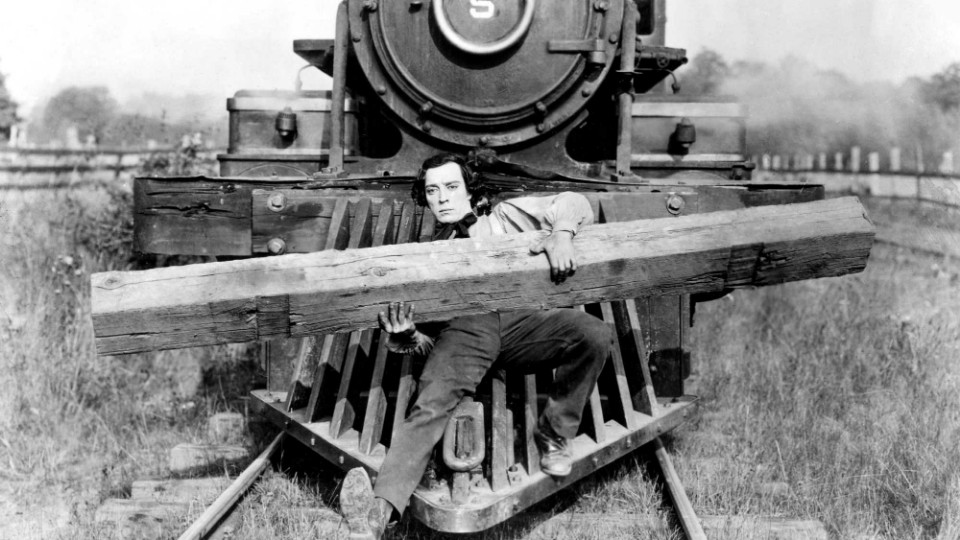 Keaton did his own stunts
Watch it
3 min read

Buster Keaton was a giant of silent cinema.

Many silent-era actors had a trademark look.

Buster Keaton’s look was his expressionless stare — he was the great Stone-Face.

Keaton’s movie career began in the 1910s but his best works are from the mid to late 1920s and he considered the General to be his greatest work, although audiences at the time — 1927 — thought otherwise.

The General is the true US Civil War story of a group of Union spies who steal a prized Confederate railway locomotive – called  “The General”.

The General was was an impressive beast for the 1850s, weighing 48 tonnes and able to pull up to 20 cars.

Spies, dressed as civilians, bought tickets at random stations across Georgia and beyond and seized control of the engine, and several box cars during a scheduled breakfast stop for the passengers.

The engineer and the other train staff gave chase on foot initially, hilariously to the passengers, but eventually commandeered a second locomotive.

The chase careened backwards and forwards for 90km with the civil war raging all around.

The Union spies almost got away with the heist, but were rounded up and tried for espionage by the Confederates.

Several were immediately hanged, the rest imprisoned. Others escaped back to the North where Lincoln awarded them the very first Medals of Honour.

Keaton’s 1926 movie changes the story into a victory for the South, to fit with 1920’s sentimentality.

It was the most expensive movie in Hollywood history to that time and for many years after, costing more than $7 million in today’s money.

He also developed new filming techniques using two trains running side by side to capture the on-board action.

He employed 3000 locals as extras and for one scene, spectacularly crashed one of his three trains into a river, where it stayed until it was recovered for scrap in World War II.

Those eight seconds of footage cost the then astronomical sum of $42,000. The average US wage at the time was $28 a week.

Keaton’s character has two loves, his engine and his fiancee Annabelle, played by Marion Mack, who was plucked from the Mack Sennett comedy studios Bathing Beauties.

Mack soon became the butt of on-set jokes by Keaton. One of these was caught on film.

The General was low on water and Keaton pulls up to a stop under the spout of a track-side tank to refill, but he ‘misses’ and dumps 6000 litres of water straight onto Marion — without preparing her for the shot. The shock is real!

Keaton famously performed all his own stunts, none more breathtaking than in the General.

He runs along speeding carriage rooftops, clambers down between moving carriages to disconnect cars, and rides the push-rods of the loco.

He pulls a sleeper from a track making it unstable as a train approaches, then jumps on the cow-catcher of the General juggling the sleeper as it rolls along.

Astonishingly he hurls the sleeper at another one placed by the spies to flip it off the rails.

Had he missed this one attempt, the train would have likely derailed and Buster would have been no more.

In 1989 the US Library of Congress opened its National Film Registry of culturally, historically and aesthetically significant movies.

Keaton’s “The General” was among the inaugural entries alongside Citizen Kane, Gone With The Wind, Singin’ In The Rain and Casablanca.

While there are streaming copies around, The General has been meticulously restored in high definition for BluRay from the original camera negative and carries a new surround sound orchestral musical soundtrack. One of my favourites!