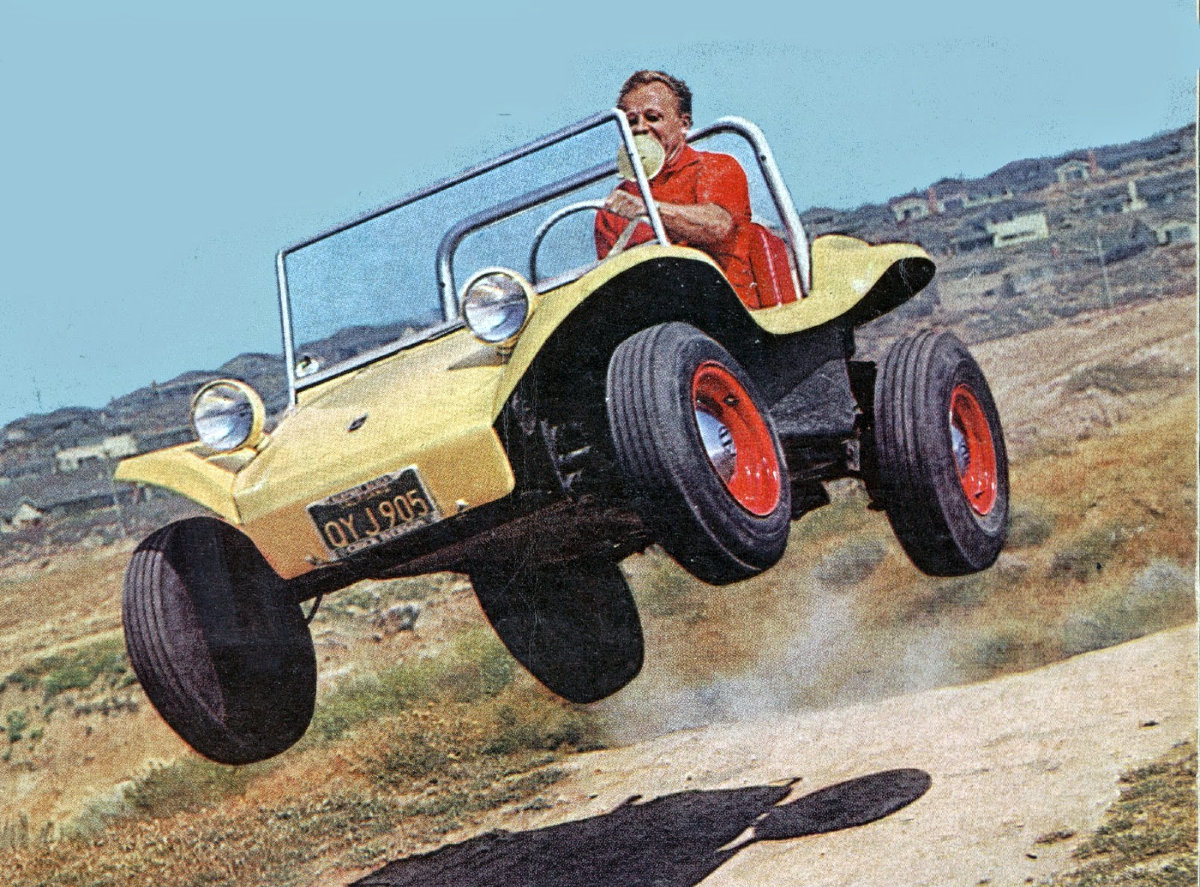 California is mourning the man who brought us the VW-based Beach Buggy back in the 1960s.

Surfer, inventor, artist, war hero and racecar driver, the larger than life Bruce Meyers passed away this week at the age of 94.

It was Meyers who brought surf and car culture together in Southern California with the invention of the Meyers Manx.

The name was taken from the Manx, a tailless breed of cats.

Meyers is also credited as a creator of the famous Baja 1000 off-road race.

While his firm only produced around 7000 of the original fibreglass-bodied vehicles, the design became synonymous with the idea of a “dune buggy” and driving to the surf and sand.

“My life has been full of adventures. I want people to have an adventure in life,” he once said.

Born in Los Angeles, Meyers grew up around beaches, surfing and vehicles; his father was a prominent car dealer.

With the arrival of World War II, Meyers first enlisted in the Merchant Marines, then the Navy.

In 1945, he was aboard the aircraft carrier USS Bunker Hill when the ship was hit by two kamikazes.

Nearly 400 crew perished that day, but Meyers survived and swam through the wreckage to rescue fellow seaman.

After the war, Meyers returned home and went to art school.

He spent much of his time surfing and learned how to build sailboats using what was, at the time, a remarkable new material known as fibreglass.

Spending plenty of time off the beaten path, Meyers noticed many fellow surfers driving Volkswagen Beetles, minus many body panels – to traverse the dunes that traditional 4×4 vehicles had trouble navigating.

So, in 1964, Meyers set about creating a better way over the dunes.

Using the Beetle’s floorplan and running gear, he hand-built a fibreglass tub to go on top, with chromed “bug-eye” headlights.

Rather than cobble together a collection of other vehicles, his vision was to create something that came across as fun and artistic, with a touch of hotrod inspired flare.

The result was dubbed “Old Red,” and it was a look that would spark an entire culture of affordable, lightweight Beetle-based buggies.

“It was a phenomenal success,” he said. “Suddenly everybody wanted this happy little car. It’s a visualization of friendship and love.”

A few years later, Meyers and friends decided to take their buggy to Mexico, where motorcyclists had been running long-distance races through the desert terrain.

With just a few days preparation, he and a co-driver won the race that went on to become the Baja 1000, one of the world’s great off-road races.

Though Meyers founded his own buggy building operation, now known as Meyers Manx, his design proved a little too popular to control.

Estimates vary, but sources agree more than 250,000 Meyers-inspired buggies have been built worldwide.

Only in recent years did Meyers re-start production of a new buggy – still sitting on the Beetle chassis – but now with two seats instead of four.

The original “Old Red” was added to the National Historic Vehicle Register in 2014 and represents a design cherished by countless numbers of fans worldwide.

“I was just a character who lived a lifestyle of breaking traditions and the dune buggy did that,” he said.