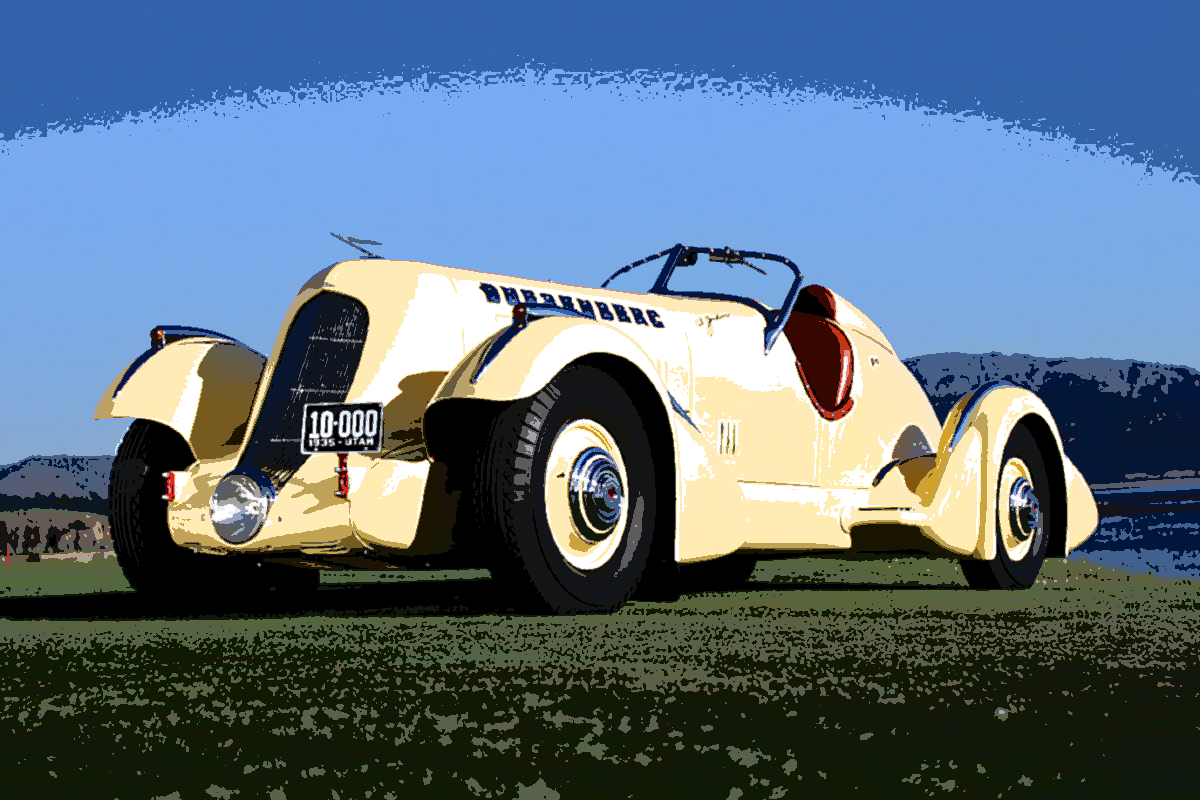 HINDSIGHT can be painful.

I should never have sold any of the first 50 or so cars I’ve had so far. They’re all worth a lot more now.

I also wish I’d bought some Bitcoins when they first appeared.

But neither the cryptocurrency nor any of my earlier cars soared in value anywhere near as much as a Duesenberg.

None of the American cars are known to have ever arrived in Australia, but they are revered machines, and some pundits maintain they were the best ever built.

Several different models were built from 1926 to 1936, the A, X, Y and J — the latter the youngest and most glamorous of them (and they included the SJ, SSJ, JN and SJN).

They were pricey cars, but after the Great Depression, immediately followed by WWII, desperate and penniless owners who had lost their jobs or businesses were selling them off for whatever they could get.

More than half of America’s banks had collapsed at the time and some 15 million people were without income of any kind.

We’re talking US dollars here. That’s crazy money for a car that most folk could only dream about.

Advance to the 1950s, when the economy improved and classic and vintage cars became sought after by collectors.

Prices started lifting to some $500, but by the end of the decade, a J in ordinary condition could fetch at least $4000, while an exceptional example could change hands for around the $10,000 mark.

Eleven years later a Duesenberg sold for $1 million and today, any Duesy model J will attract six or seven-figure prices.

One example last year went for a breathtaking $10 million.

Described as ‘one of the most extraordinary cars of the Classic era, it had a 400-horsepower supercharged straight-eight engine placed in an abbreviated Duesenberg chassis with roadster bodywork.

Cooper once said: “When I first came to Hollywood I used to dream: Boy, if I had money I’d have the hell-firedest automobile ever assembled.

“I had one, I had two. I flashed around. In a lot of ways. For a time. Then I got to wondering why I wanted those sensational cars . . . It gave me a feeling of superiority to pull up beside some other fellow’s car in my deluxe job.”

The cars were the work of German-born brothers Fred and August Duesenberg, who, with their parents, migrated to the US in 1884.

The brothers became self-taught engineers, learning their craft through various apprenticeships and started building and racing bicycles from 1890s before turning their talents to the fast-emerging motor car scene.

Their first cars were known as Masons, in respect of Des Moines lawyer Ed Mason, who bankrolled their venture.

That was in 1906, and the twin-cylinder car proved to be more powerful than most of its rivals, which attracted Senator Fred Maytag.

So in 1910, he (later to become a washing machine mogul), bought the company and the Mason-Maytag Motor Company was formed.

But a year later, the good senator figured there was more money in washing machines than cars — and bowed out.

The brothers had by then progressed to building racing cars using eight-cylinder engines of their own design and, in mid-1913, they formed the Duesenberg Motor Company.

News of their expertise travelled fast, and in they were commissioned by a Commodore James Pugh to build a power plant for a speedboat capable of winning the Harmsworth Trophy race in the UK.

WWI stopped that race, but the boat, with its revolutionary twin 12-cylinder engines, later set a new nautical world record of 61.2 mph (98.5 km/h), making it the first vessel to top the ‘mile-a-minute’ mark.

The twin engines with their 24 cylinders produced all of 800hp. That’s 597kW in modern terms!

Next, they tackled the Indianapolis 500, placing 10th and 12th on their first outing.

Success continued in the ensuing years.

It was the only US win in a Grand Prix until the 1960s, and remains one of the proudest achievements in American racing.

Then came the Model A, the first passenger car produced under the Duesenberg name.

It had a straight 8 engine, preceding Packard’s by three years and it was the first car with hydraulic four-wheel brakes, four years ahead of Chrysler.

Despite its sophisticated features, the Model A had an uphill journey in the luxury car market.

The first one built was specially customised for Hawaiian industrialist Samuel Northrup Castle.

He was a giant of a man, standing 7 ft tall (2.13m), and the car’s body was  designed by Bender Body Company of Cleveland, Ohio, and built in Duesenberg’s Indianapolis factory.

Samuel Castle kept the car throughout his lifetime, and when he died in 1959, passed it on to his family.

It stayed in the Castle family for all of 99 years.

In 2019, they donated the one-of-a-kind vehicle to the Auburn Cord Duesenberg Automobile Museum in Indiana.

All up, only 650 of the Model A were made, just 13 of the model X and the Y remained only a single prototype.

However, in 1926, Auburn president Errett Lobban Cord acquired Duesenberg and gave the brothers the dream assignment of designing a supercar that could surpass the world’s best.

The result was the Model J Duesenberg.

About half the Model Js had coachworks devised by the company’s chief designer, Gordon Buehrig.

The rest were by independent US custom coachbuilders such as Derham, Holbrook, Judkins, LeBaron, Murphy, Rollston, Walker, Weymann and Willoughby.

In Europe, Fernandez et Darrin, Franay, Gurney Nutting and Saoutchik each built at least one Duesy.

Most of the strikingly-styled cars were bought by celebrities, among them cowboy actor Tom Mix, Ginger Rogers and loverboy Rudolph Valentino — and in 1933 Enzo Ferrari bought one to add to his scuderia of Alfa‑Romeos.

Acceleration was startling with zero to 100 mph (160km/h) coming up in seven seconds.

The most expensive model built was a 1934 Walker-bodied coupe for Josiah Lilly, president of Lilly Pharmaceuticals.

It’s said to have cost $25K and featured a sleek roofline, V-shaped windscreen, bulbous front mudguards with protruding headlights and its twin wing-like bumper bars were touted as adding to the aerodynamics.

The downside was the car’s massive weight of some 6000 lb (2720kg) and odd features such as separate keys for the various doors and compartments.

It took two people to fill the fuel tank, the filler of which was in the boot. But the heavy boot lid had no stay, so some strong person had to hold it up while the other pumped the fuel.

Unsurprisingly, Mr Lilly did not keep it long. Within a year it was sold to the mistress of a New York City politician, and then to a servo owner who used it as a tow truck.

It was poorly restored before TV comedian and prolific classic car collector Jay Leno rescued and and restored the car.

Leno loves Duesys and has a few in his world-class collection.

What of the Duesenberg brothers?

Fred contracted pneumonia and died in 1932, aged 56, while August lived on to reach the age of 75.

Their sales slogan: “Built to Outclass, Outrun, and Outlast any car on the road” was hard to argue with.

Had they known, they could well have added a word or two about their cars being an investment like no other.