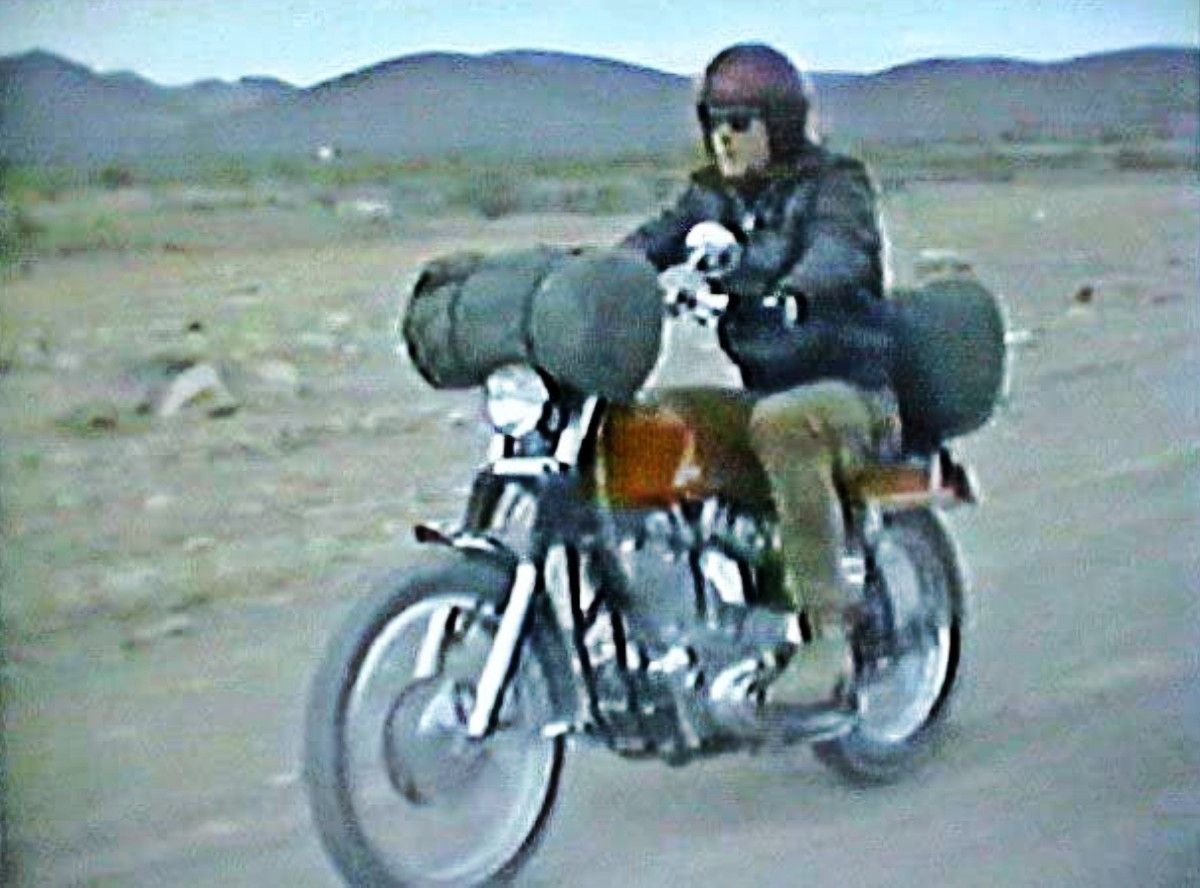 Before Easy Rider hit the big screen, motorcycle hero Jim Bronson was already plying the highways and byways of America.

After witnessing the suicide of his best mate Nick (Martin Sheen), Bronson quits his job, buys the dead man’s shiny Harley Davidson and hits the road in a search of a more fulfilling life.

Along the way he encounters various characters, with their share of problems, including the fesity, flighty, runaway bride Temple Brooks (Bonnie Bedelia) who reluctantly joins him for the first part of his journey.

Though he’s a loner and something of a latter day cowboy, he’s always willing to pitch in and lend a helping hand — a good samaritan if you like.

Parkes will be known to younger viewers for his later work with filmmakers such as Quentin Tarantino, Robert Rodriguez and Kevin Smith.

He was in Tarantino’s From Dusk Till Dawn, as well as both Kill Bill movies, and also appeared as Jack Kirby in the 2012 Ben Affleck masterpiece Argo.

Bronson’s ride in the show is a 1969 XLH 900cc Harley-Davidson Sportster which is now on display at the National Motorcycle Museum in Iowa.

Having said that, apparently six bikes were used in the making of the series, along with three trail bikes for some stunt scenes.

In the first episode, Bronson enters a spectacular hill climb to earn some money, putting down Temple’s watch to cover the entry fee.

The fuel tank of the Harley is illustrated with the Eye of Providence. Huh?

The symbol depicts an eye, often enclosed in a triangle and surrounded by rays of light or Glory, meant to represent divine providence.

A well known example can be found on the back of the Great Seal of the United States which is on the US $1 bill.

In keeping with the times, Bronson is a committed pacifist and no longer to prepared to spend his life working for ‘The Man.”

The show has some similarities to the early 1960s series Route 66 (in fact, Michael Parks guest-starred in one episode).

It’s also been described as a “knock-off” of Easy Rider, but its debut in March, 1969 pre-dates the cult movie by several months.

The first three episodes, including the end credits scenes, were shot in and around Jackson, Wyoming.

The producers thought it would be a good idea to screen the pilot in the town cinema, to give locals a sense of where the series was going and what they were in for — since they would shooting in and around the town.

Before Bronson, Michael Parks, had acted on television and starred in three anti-establishment films, Wild Seed, The Happening and Bus Riley’s Back in Town.

He went on to have a long if chequered career in TV shows and horror movies.

Long Lonesome Highway and Closing the Gap are taken from the show.

Michael Parks and Bonnie Bedelia sing “Wayfarin’ Stranger” together in the movie.

Parks also performed Long Lonesome Highway over the credits at the end of each episode.

Written and composed by James Hendricks, it was a Billboard Magazine Hot 100 hit that reached #20 in 1970.

The opening instrumental is titled “Then Came Bronson” and was composed and conducted by George Duning.

The two albums mentioned earlier also feature other music from the series.

After a dispute with the producers, Parks said he was informally blacklisted in Hollywood.

After the cancellation of the show, he didn’t work in another major Hollywood production for several years,

The actor admitted he could be “difficult on the set” but objected to producers wanting to make the series more violent.

He requested a full burial at sea, which his wife attended alone.

Some series have just never made it on to the re-run cycle and Then Came Bronson seems to be one of them.

Have a look on YouTube however because quite a few episodes are available from the look of it. If you find the movie let us know?