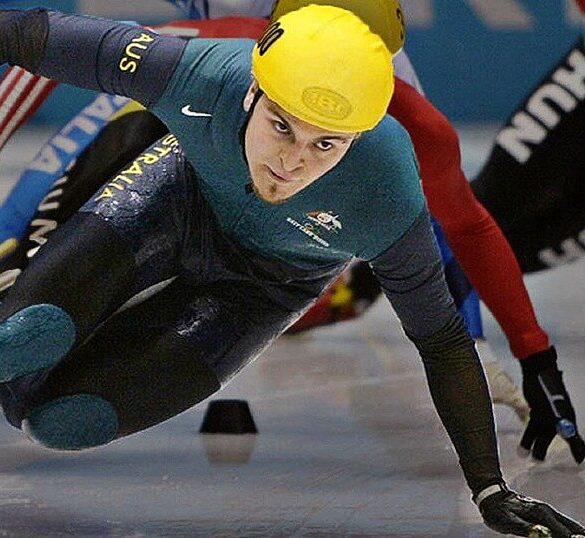 The Winter Olympics are underway and in Australia that means a fresh round of comments about skater Steven Bradbury.

Entered in the 1000m speed skating event, he made the final, contested by the five fastest competitors.

It is now part of Australian folklore how Bradbury settled into 5th place where he sat until the final lap — the final turn in fact.

The Chinese and Japanese competitors were jostling for the lead, when they collided, both falling and bringing down the Canadian and American skaters.

Bradbury, sitting back in the last position, escaped the carnage, as he was five metres behind the others.

While the fallen struggled to regain their feet, our Steven calmly skated by them to take gold.

And so, for the last 20 years, every time an athlete wins, in a last minute manoeuvre that involves a mistake by another athlete, the media calls it “doing a Bradbury”.

I have three issues with that characterisation.

A four-time Olympian, as part of the 5000m relay team, he won Gold, Silver and Bronze at world championships level, and bronze at the 1994 Winter Olympics — Australia’s first ever Winter Olympics medal.

He also faced his fair share of adversity along the way, including a nasty accident in 1994, when a competitor’s skate sliced open his thigh, requiring 111 stitches.

Then, in 1998, he broke his neck in a training accident and six weeks in a halo brace, requiring four pins to be inserted in his skull and screws and plates bolted into his back and chest.

Doctors told Bradbury that he would never race again, but he was determined to make another Olympics.

While that sounds simple, speed skating on an indoor track can be tricky.

The track is 111 metres long, so this means nine laps with a total of 18 turns.

You have to skate as fast as you can for about 35 metres, then abruptly do a U-turn — then repeat the process.

On that day back in 2002, it was Bradbury who was able to better balance these two skills.

While most of my readers know of my near legendary efforts on the Bush Cricket pitch, or in seniors hockey tournaments, some may not know that I was a pretty good pistol shooter in my younger years.

In 1980, I was an up and coming A grader in the Rapid Fire discipline. A good consistent shooter, but one grade below the elite Master Grade.

When the NSW team was being picked for the National Championships, my name came up as a possible reserve.

There was a more experienced Master, who was also in contention, but my averages were slightly better.

So, they arranged a shoot off (no, not a duel), and Mr Sport prevailed.

Two days before I headed to Darwin for the Nationals, another shooter dropped out and I was promoted to THE TEAM.

Now, at that time, only Australians could compete, so they also ran an International Open tournament in conjunction with the Nationals.

You had to pay an additional entry fee, but the same score was counted for both events.

The only additional benefit you got was a competitors badge.

Like most Australian shooters, I entered all five events in the Nationals: Rapid Fire, Centre Fire, Standard Pistol, Free Pistol and Air Pistol — but only entered the International Open in my favourite — the Rapid Fire Event.

Rapid fire consists of a series of five shots, fired at five targets, set 75cm apart from a distance of 25 metres.

First time you get eight seconds, then six seconds and finally four, with two rounds — 60 shots in all.

Two days before the event, I shot a personal best of 588 out of 600 in practice — to attain the rank of Master.

In the Nationals, I shot 582, to finish 5th, helping NSW to finish 1st in the Teams event.

At the presentation, I was shocked however when they called my name as the winner of the International Open.

It turned out the four shooters who beat me in the Nationals had not entered the International Open, so in the blink of an eye, I went from 5th to 1st — just like Steven Bradbury.

So next time you hear a commentator say someone has “done a Bradbury” — just remember that Bradbury did a Mr Sport.