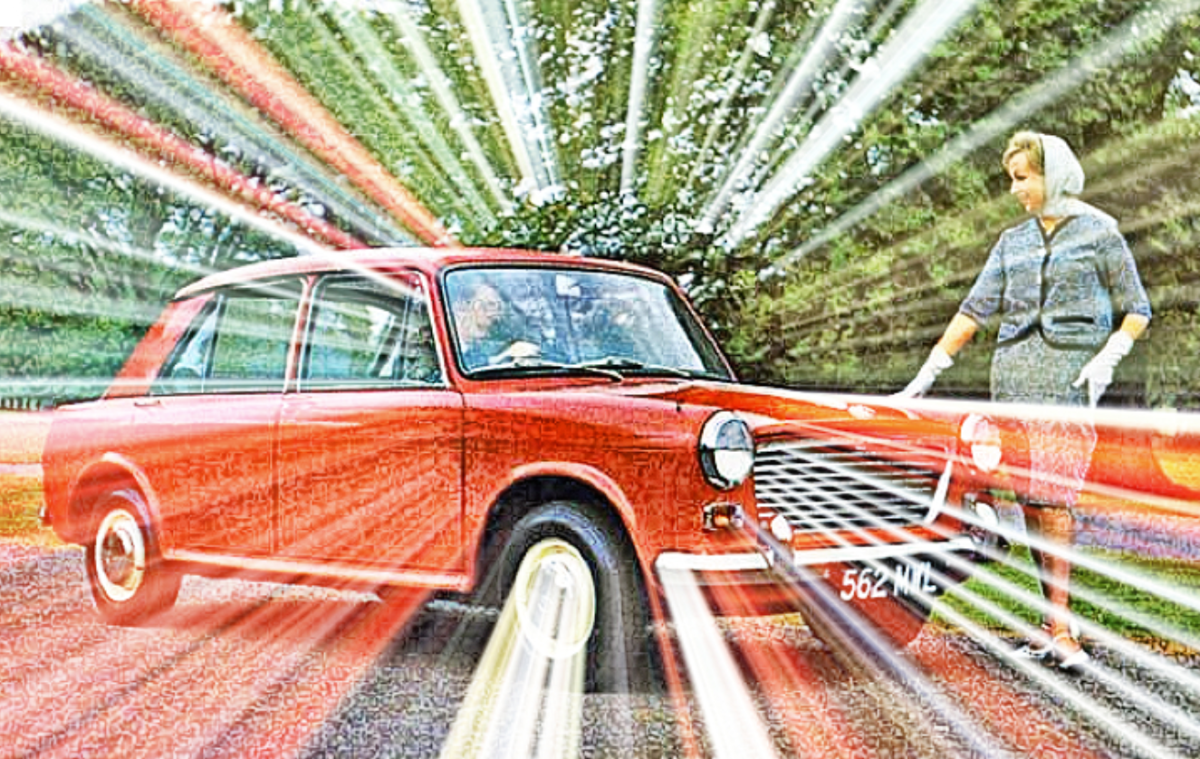 Back in the 1960s, the Morris 1100 quickly became the bestselling four cylinder car in Australia, displacing both the Beetle and the Mini itself.

In one of the more ingenious ad campaigns, the car had a tear-drop shaped sticker fixed to the rear window saying: “It Floats on Fluid”

Wheels magazine was impressed enough to name the 1100 its Car of the Year in 1964.

The Morris 1100 was introduced to the Australian market in February, 1964 — two years after its British debut.

It boasted innovative trend-setting features, especially a transverse-mounted 1098cc engine with front-wheel-drive, gearbox in the sump and a wheel at each corner.

Known internally as the ADO16, British Motor Corporation (BMC) had taken all the basic ingredients of the Mini and added an attractive, Pininfarina-styled four-door body.

It was all supported by the new Hydrolastic “Float on Fluid” suspension.

The Hydrolastic suspension system was devised by Alex Moulton.

It used rubber as the springing medium with fluid under pressure that applied load to the rubber springs.

Displacer units (commonly called ‘bags’) are connected front and rear on each side.

When a front wheel hit a bump, the rear of the car rose, keeping the car level.

It took BMC Australia (BMCA) two years to make sure the UK car was dust proof and to develop interior materials suitable for the hot Australian climate — and of course to strengthen it for our roads.

The British car had bucket seats.

The local version came with a bench, for cost reasons.

For a small car the interior was sumptuous—remember, this is 1964 Australia.

The upholstery was a foam-backed, expanded PVC vinyl, armrests were fixed to all doors, a parcel tray ran under the dash and there was a large open glove box in front of the passenger.

A temp gauge was included along with the usual fuel gauge and speedo; idiot lights for generator and oil pressure.

Padded sun visors were also part of the safety package.

The 1100 came with disc brakes, a heater-demister, windscreen washers and a sealed radiator system as standard equipment.

You got all this for a price that was 25 per cent cheaper than an EH Holden Premier sedan with similar “luxury features” — but not disc brakes.

However, the 1100 wasn’t a total paragon of virtue.

Then there were oil leaks and problems with constant velocity joints and clutches and sometimes dodgy electrics which kept BMC service departments busy.

Like the Mini, they seemed to suffer from water in the ignition because the distributor was right in the firing line from spray.

By May, 1966 Australian content reached just over 75 per cent.

Small improvements were made during the lifetime of the car, particularly with a neater gearshift and revised seat patterns.

The first major change came in late 1967 with the addition of a larger 1275cc engine as an option.

BMCA called it the Morris 1100S, with a subtle ‘S’ badge added to the boot lid.

At the same time as the 1100S was introduced, an automatic version of the 1098cc was made available.

Unfortunately, the box was rather fragile, leaving few survivors.

Few were made, but it meant that the ads could boast prices starting from $1899.

In comparison, an HK Holden Kingswood manual cost $2414, with the 161 six and drum brakes.

It managed to outsell all of them, with 85,000 units finding their way on to our driveways during the five years it was on the market

These cars were essentially an 1100 with a 1485cc overhead cam Austin Maxi engine squeezed in, later used in the Australian Morris Marina range.

Although the Mini Cooper and Cooper S were the great race and rally champs of the day; the 1100 rarely saw a racetrack, nor were they rallied much.

One was crewed by Jane Richardson and Midge Whiteman, the first all-female team in the event.

The other was driven by Clyde Hodgins and Kevin Nipperess and managed 108 laps.

In 1968, as a pre-London-Sydney Marathon stunt, Evan Green, BMCA’s PR manager and his irrepressible mate ‘Gelignite’ Jack Murray raced an 1100S against a light plane piloted by two women around Australia.

The plane could not fly at night, but Green and Murray were able to drive the 1100 day and night.

BMCA shipped an 1100S to England for the London to Sydney Marathon.

The car was sponsored by the Sydney Daily Telegraph and driven by Marion Macdonald, Jenny Gates and Eileen Westley.

They finished 50th and were running at the end, ahead of 48 other teams.

The 1100 was only ever sold here as a four-door Morris.

In the UK it was marketed as an Austin, MG, Wolseley, Riley and the super luxury Vanden Plas, and in Italy as an Innocenti.

Did ADO16 influence the automotive scene? The answer is yes.

CHECKOUT: Eight is enough (for Morris)