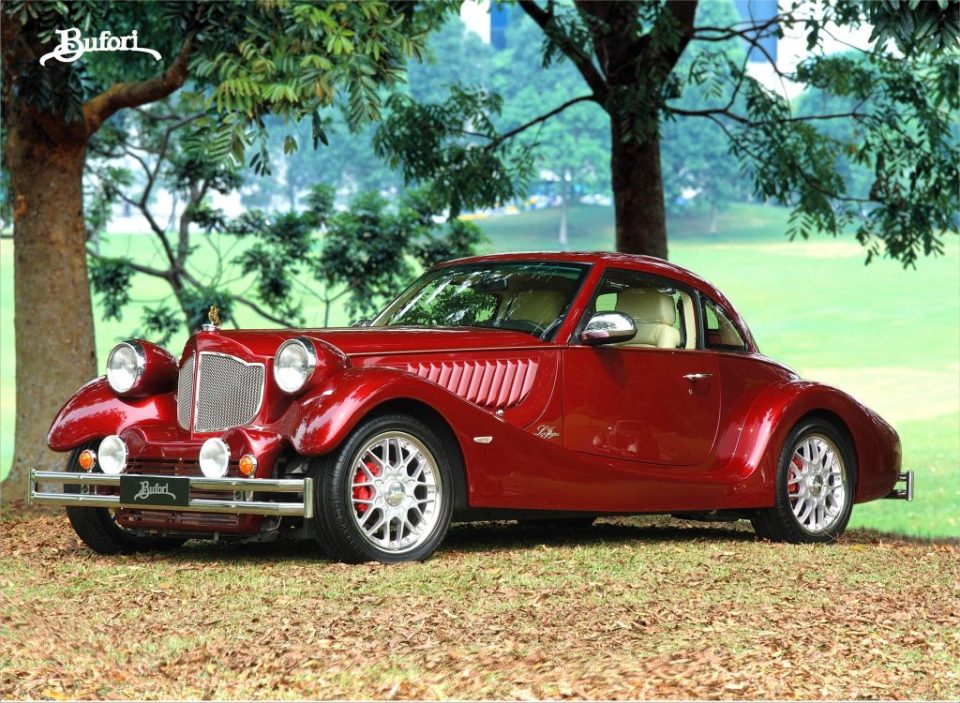 IT’S not every day one sees a Bufori for sale, but one of the rare beauties recently appeared in a Perth showroom – and most people have no idea of what it is or where it hailed from.

Fact is, the Bufori, despite its Italian-sounding name, started life

A product of the three Khouri brothers, Anthony, George and Gerry, it went into production in Sydney in 1986, using classic 1930s US grand convertible styling married to modern technology.

The Khouris, whose family migrated to Sydney in 1951, dabbled about with various names before calling their creation Bufori, said to have been derived from the first letters of the words beautiful, unique, funtastic (is that a word?), original, romantic and irresistible.

Production then shifted to Malaysia, after the brothers got a hard to refuse offer from the Malaysian king, and soon after, the prime minister as well, urging them to take their enterprise to Kuala Lumpur.

0 Malaysians were sent to Sydney to be trained in vehicle production before the operation moved offshore.

The first Australian model, called the Madison, was made from ’86 to ’88, using a 1.6litre VW engine.

by the Bufori MkI, which could be had with 1.6 or 2.1 litre power from ’92 to ’94. Then came the Bufori V6i, which had a 3.8litre Buick engine up front and rear wheel drive, and it was produced alongside the Bufori MkII, which used tail-mounted Subaru engines, and came in two and 2-plus-2 seating, and soft or removable hardtop.

About 150 MkIIs were built.

The one that was for sale at Mean Machines in Perth was a 1994 MkII, probably one of last Australian-made models. Unfortunately Mean Machines closed its doors and the whereabouts of that particular Bufori are unknown.

The classy Stutz-like sports car with its wing-mounted outboard spare wheel was built on a VW floorpan and had a 2.2litre Subaru engine in its tail, all-independent suspension and four-speed gearbox.

The body was all Kevlar and carbon-fibre and it was finished in a coat of pearl violet, with silver trim.

After the Khouris moved to Kuala Lumpur, a classy two seat hardtop coupe, the Bufori La Joya, appeared – and was an instant hit with members of the elite set who wanted something different from Bentleys, Maseratis and other traditional upmarket brands.

There was also the La Joya (Spanish for ‘jewel’) which had a mid-mounted quad cam 2.7litre V6 driving the rear wheels through a tiptronic transmission.

The interior is of fine Italian leather and French-polished walnut burl veneer. Like all Buforis, the La Joya is made to order and hand-built to international standards in about 3500 hours. The factory in Kuala Lumpur has a staff of about 100.

The flagship is the statuesque Geneva, a car popular with sheiks and maharajahs and company spokesman Felix Haller says future models are in the pipeline.

‘Our main markets are the Middle East and Asia and we build about 30 vehicles a year,’ he said.

‘We currently have orders from Australia but they may not be delivered this year due to our busy production schedule.’

The super-luxurious Geneva uses a 6.4litre Chrysler V8 with a five-speed tiptronic transmission with paddle shift. It puts out 351kW and 630Nm, runs to 100km/h in 5.4seconds and has a top speed of 280km/h.

Fuel consumption, as if that matters, is 14litres/100km.

The big sedan’s performance can be enhanced via an optional supercharger.

The spaceframe chassis is of stainless steel, there’s a built-in rollcage, it comes with the full suite of electronic driver aids and can be ordered with a built-in fire suppression system.

A welcome feature of yesteryear is a comprehensive toolkit.

It has LED daytime running and taillights, reversing camera, automatic air purifier and freshener, a nine-speaker audio system with surround sound, Bluetooth hands-free communication, iPod connection, CD and DVD and you can order your Geneva with a 24K gold bonnet emblem and script in gold or stainless steel with blue sapphire zirconian.

The dash comes in walnut burl, but buyers can specify various other grain and colour choices.

The rear centre console can accommodate an automatic coffee machine, a Chinese tea set with instant boiling water, a fridge, a cigar humidor or a mini-bar. The rear lounge seats are electrically adjustable and feature heating and cooling as well as a massage function.

The car is also equipped with a thermal night-vision camera and adjustable air suspension.

Bufori also had a stab at motorsport, in 2009, when it produced its BMS R1 at the Macau Grand Prix, with former F1 driver Alex Yoong at the wheel. The car did well, running among the Aston Martins and Porsches before it crashed.

All up, an impressive and respected brand that started life in a garage in Australia.