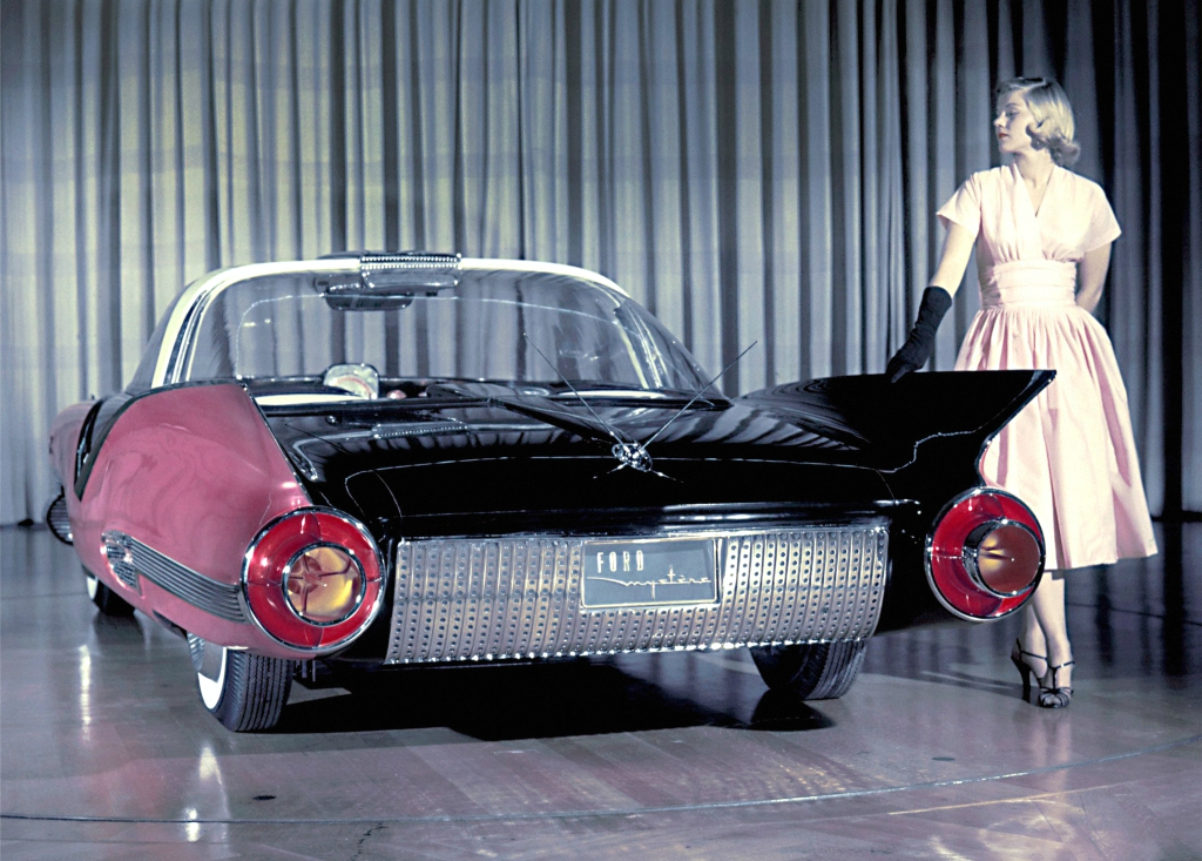 Ford’s rather outlandish Mystere dream car was created by Bill Boyer in mid-1954.

It was originally intended to be showcased at the 1955 Detroit Auto Show, but was withheld when it was realised that many of its design ideas were the source of styling for the 1955 Thunderbird, which Boyer also helped shape, and the upcoming 1957 full-sized Fords.

The Mystere’s long swooping chromed mouldings graced the Thunderbird and later Ford models and the cantilevered fins were used on just about every Ford in one form or another right up to the 1961 Fairlane.

Supposedly powered by a rear mounted, turbine engine — it never actually had an engine fitted — the Mystere was constructed in fibreglass by Creative Industries in Detroit.

Creative Industries was a semi-secret provider of concept cars and prototypes to American auto makers.

The glass bubble roof combined with the side windows and windscreen.

It hinged at the back and opened to a 70 degree angle to allow entry and exit via cut down doors.

The boot was up front and contained the spare tyre.

And, lest you worry about how the occupants would survive the heat of the sun’s rays under the large expanse of glass, an air scoop at the top of the windscreen delivered fresh air while the car was moving.

Ford’s publicity folk went a little quiet when it came to explaining how fresh air entered the car when it was motionless.

The steering column was centre mounted with an aircraft-type “throw-over” steering wheel arrangement that mean it could be instantly changed to left or right hand drive.

Unfortunately, the Mystere was destroyed in the late 1970s, according to author Leon Dixon, in his book about Creative Industries.

Bill Boyer went on to design the Thunderbird of the 1960s and was Chief Designer at Ford Australia in the early 1970s.

The XC Falcon was one of his efforts.

The main criticism of the Mystere was that it looked just a little too cartoonish compared to the dream cars being showcased by Chrysler and GM in the 1950s.

CHECKOUT: Bill had design down to a T (bird)