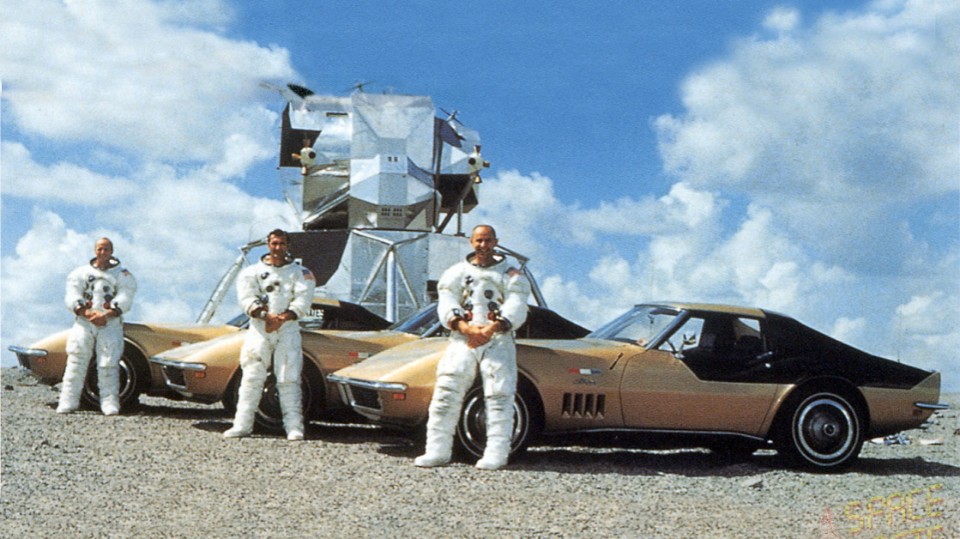 Astronauts got a Corvette for $1 a year

Home
Wheel life
Astronauts got a Corvette for $1 a year

It’s oft said that if you remember the Sixties, you weren’t there.

That’s undoubtedly true for some that were (and still are) in the music industry, but the Sixties can be remembered for many, many things.

JFK’s memorable “We choose to go to the Moon.” speech of 1962, and his assassination 14 months later.

And the Chevrolet Corvette. The car of choice, it would seem, for many astronauts in the Apollo program.

John Glenn, a family man, had a station wagon. But Alan Bean, Gus Grissom, Alan Shepard, even Neil Armstrong — all drove a ‘Vette.

Shepard arrived for his first day of astronaut training in 1959 driving a 1957 Corvette. A former naval aviator, he had been selected to be part of “The Mercury Seven”, the first group of astronauts to be put in space.

Shepard himself would be the first American in space in his Freedom 7 craft in May, 1961.

General Motors recognised his contribution to the sciences by gifting him a customised 1962 model Corvette. It was former Indy racer and GM dealer Jim Rathmann that can, however, be credited with sparking a long term relationship between some of NASA’s finest and the Corvette brand.

Realising the value of what was to come, Rathmann contacted a GM senior executive, Ed Cole, and using the wiles of a car salesman, convinced Cole to allow him to offer the seven astronauts a Corvette at just one dollar each on a yearly lease plan.

Rathmann was right on the money as the deal proved to be popular with the astronauts and provided enough extra exposure for Chevrolet for them to continue it through the Gemini and Apollo programs.

Virgil “Gus” Grissom, one of the three that would later lose his life in NASA’s first real test of how to deal with tragedy, would race Shepard in almost identical Corvettes, fitted with the big block 427. Each would find a way to increase power or handling or both in an effort to outdo the other.

Armstrong joined the space program in 1962 and quickly proved himself to be one to watch. This would later come to fruition in July, 1969.

He also drove a Corvette early on and later would trade in a 1967 version which allegedly was placed on an auction site for over a quarter of a million US dollars. However there were questions as to whether it was a genuine Armstrong-owned car.

Apollo 12 is perhaps the mission that can be best associated with the Corvette. Bea, Dick Gordon, and Pete Conrad, all ex-navy, decided to formalise their association by getting and having their Corvettes painted in identical colours.

Colt a constant in Mitsubishi cosmos

The base colour was gold, with the rear wings painted black, separated from the gold by a white pinstripe. Each car was individualised, with the men adding their own special forms of identification.

Not unsurprisingly the three cars, with the 390hp, 427 cubic inch V8s under the long bonnets, became known as “Astrovettes”.

Corvette and space would reunite in 2009. An opening sequence in the Star Trek reboot featured a young James Tiberius Kirk, in a nod to real life at the helm of a 1965 ‘Vette (William Shatner, the original Kirk, owned a Corvette) .

With the American manned space program in a hiatus for the foreseeable future, it’ll be quite some time before we see a Corvette in the hands of another astronaut.

CHECKOUT: New Corvette off the leash