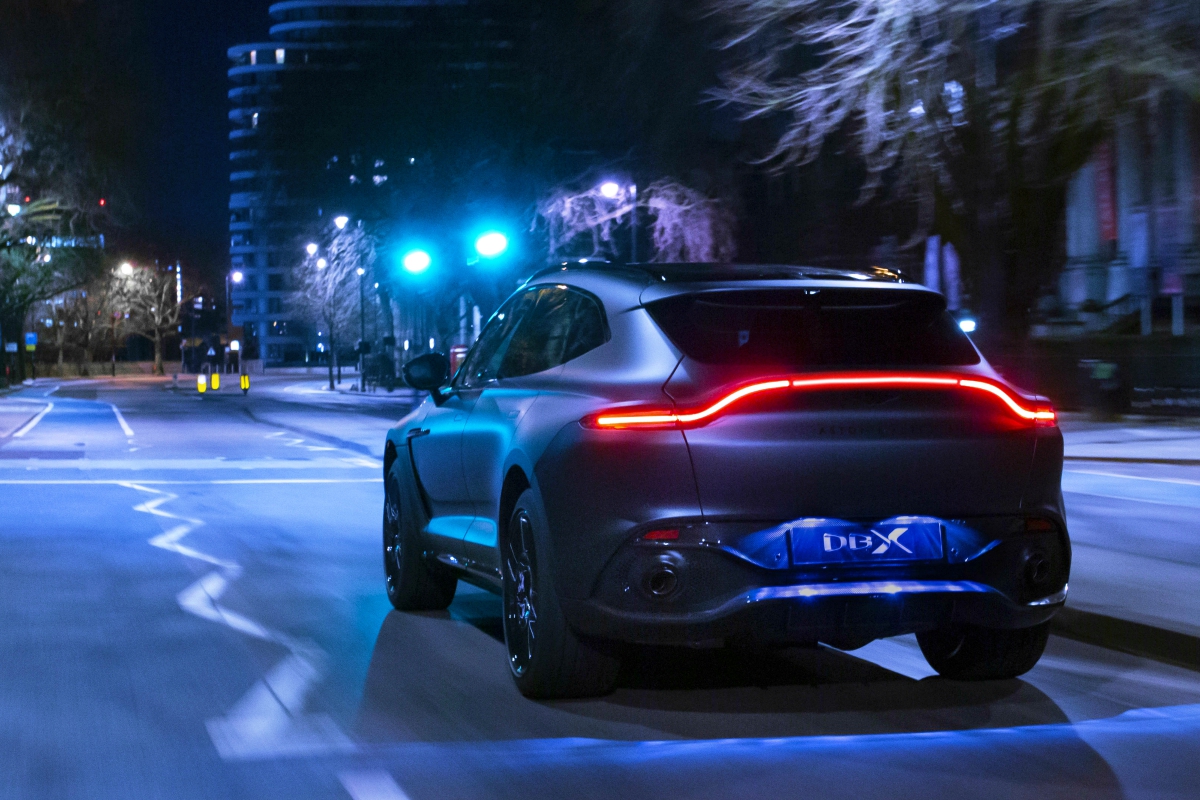 In 2015, renowned luxury sports car maker Aston Martin pressed the button on its concept for a luxury-oriented SUV.

At the time, the Bentley Bentayga, forthcoming Cullinan from Rolls-Royce, and Lamborghini’s Urus were just glints in the eyes of their respective designers.

And, as of this year, the company has decided to end its engine sourcing relationship with Mercedes-Benz.

Until the British firm locks in its own program, however, DBX will continue to be powered by a 4.0-litre twin-turbo V8.

Running on unleaded fuel, consumption from the 85-litre tank is said to be 14.5L/100km.

That oomph goes to all four corners via a torque converter spinning a 9-speed automatic.

Variable torque distribution and an adjustable air suspension (on a double-wishbone front/multi-link rear configuration) changes the ride height, with up to 50mm drop or 45mm increase in height.

The latter will no doubt aid the one or two that actually see off-road action, with a maximum approach angle of 25.7 degrees, departure angle of 27.1 degrees and a break-over angle of 18.8 degrees.

Water fording shouldn’t be an issue either, with up to 500mm of wading depth reportedly available.

A centre differential spreads the torque between front and rear in a 47:53 ratio, but in “sporting” applications virtually all torque goes to the rear wheels.

Stopping power is supplied by six-piston calipers at the front that grab 410mm x 38mm discs.

The rear gets sliding pistons and bite on 390mm x 32mm discs.

The rear will also have an electronic limited-slip differential (e-Diff).

Pirelli supplies the rubber with P Zeros on each wheel.

Aston Martin has opted for a bonded aluminium core for the DBX.

This gives the DBX a starting weight of a not inconsiderable 2245kg.

A full-length glass roof is standard and the doors are frameless.

Three different grades of leather are available, along with seven veneers for the dash with choices that range from contemporary wood to carbon-fibre and natural flax composite.

The front seats will have a three memory position and 12-way power-adjustable system, and are, naturally, heated.

Sounds for the five seats will come from a bespoke 800 watt, 14-speaker audio system with AM/FM/DAB — and for the US market — Sirius satellite radio.

Four USBs and 3 x 12V sockets allow charging and convenience on the go.

The exterior is a nod towards Aston’s current design ethos, with a built-in a rear spoiler and full body-width rear LED light strip.

The front features a separate pair of LED running lights that frame a pair of aerodynamically linked air intakes.

There’s also a pair of vents for the front wheel wells to reduce aero drag.

The main lighting is also LED.

DBX deviates from the saloons with its more organic, rounded shape from the signature grille rearwards where it terminates in an almost Jaguaresque rear window line.

It’s big too, with the curvy lines that disguise its 5039mm length.

Shoulder room won’t be an issue thanks to a width of 1998m.

Legroom? Sir and Madam will have a 3060mm wheelbase in which to waft in comfort.

Aston Martin offers a staggering 11 accessory packs which will be available from launch.

One is a “Pet Package,” which adds a portable washing system for dogs, and the “Snow Package” which includes boot warmers among its features.

Other options will include a 16-way power adjustment system for the front seats, heated steering wheel, varying styles of fabric finish, Aston Martin wings or DBX embossing and the aforementioned veneers.

These will include walnut, piano ivory wood and dark Ziricote open-pore wood — among others.

And with just 5000 per year to be made available, the first 500 buyers will be receiving some true exclusiveness.

A special ‘1913 Package’ is also available for the first 500 buyers, in honour of the company’s founding date.

These examples will get a unique fender badge, sill plaques, plus an individual inspection plaque.

They indicate the car has been inspected and endorsed by Aston Martin’s chief, Andy Palmer, confirming its exclusivity.

They will also receive a limited-run book about the build, signed by Palmer and Aston’s design boss, Marek Reichman.

Aston Martin DBX is due for release here later this year, priced from $357,000.

CHECKOUT: Licence to chill — 007’s next Aston Martin in doubt