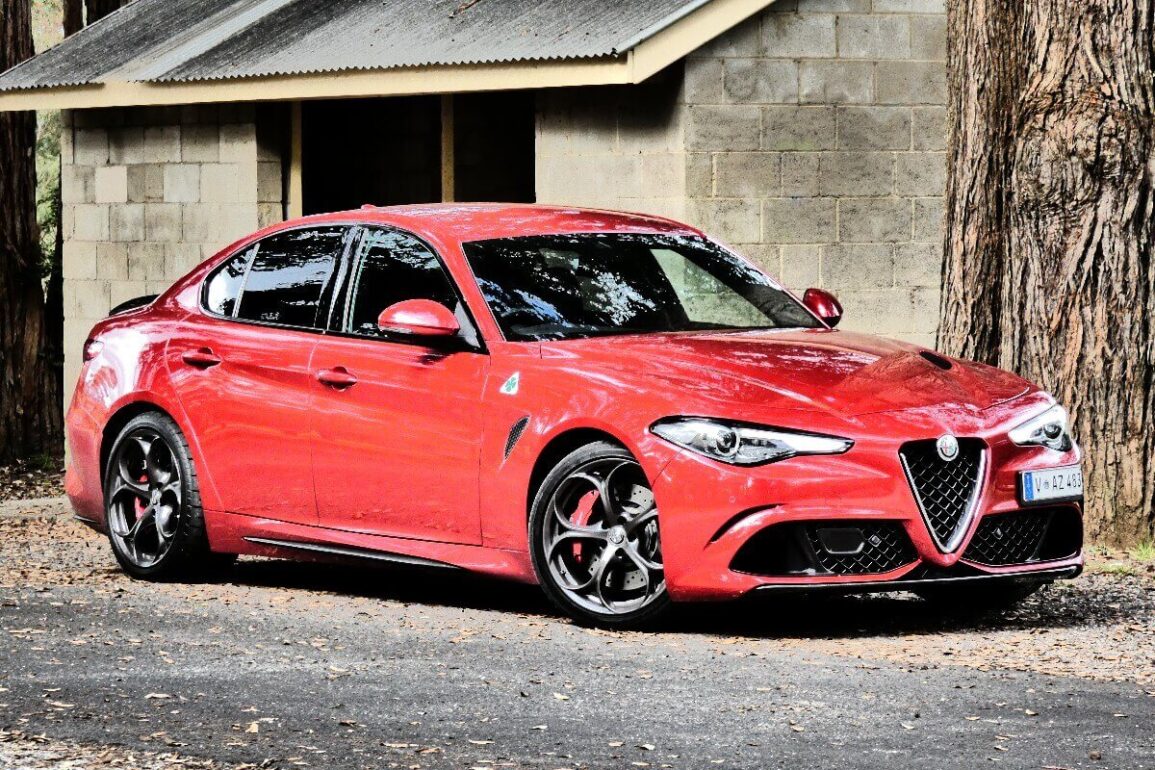 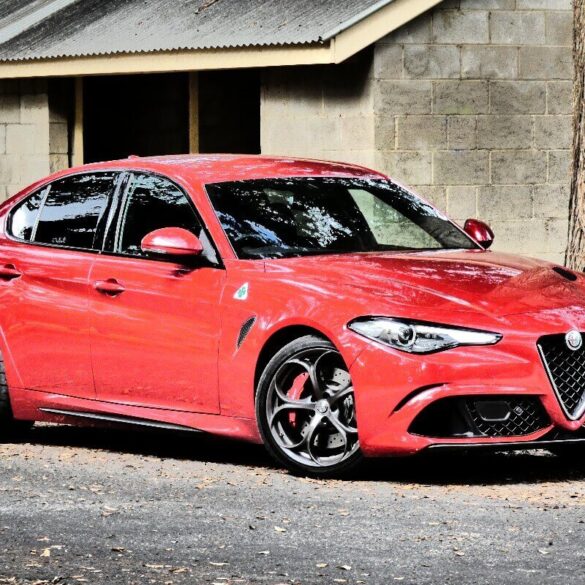 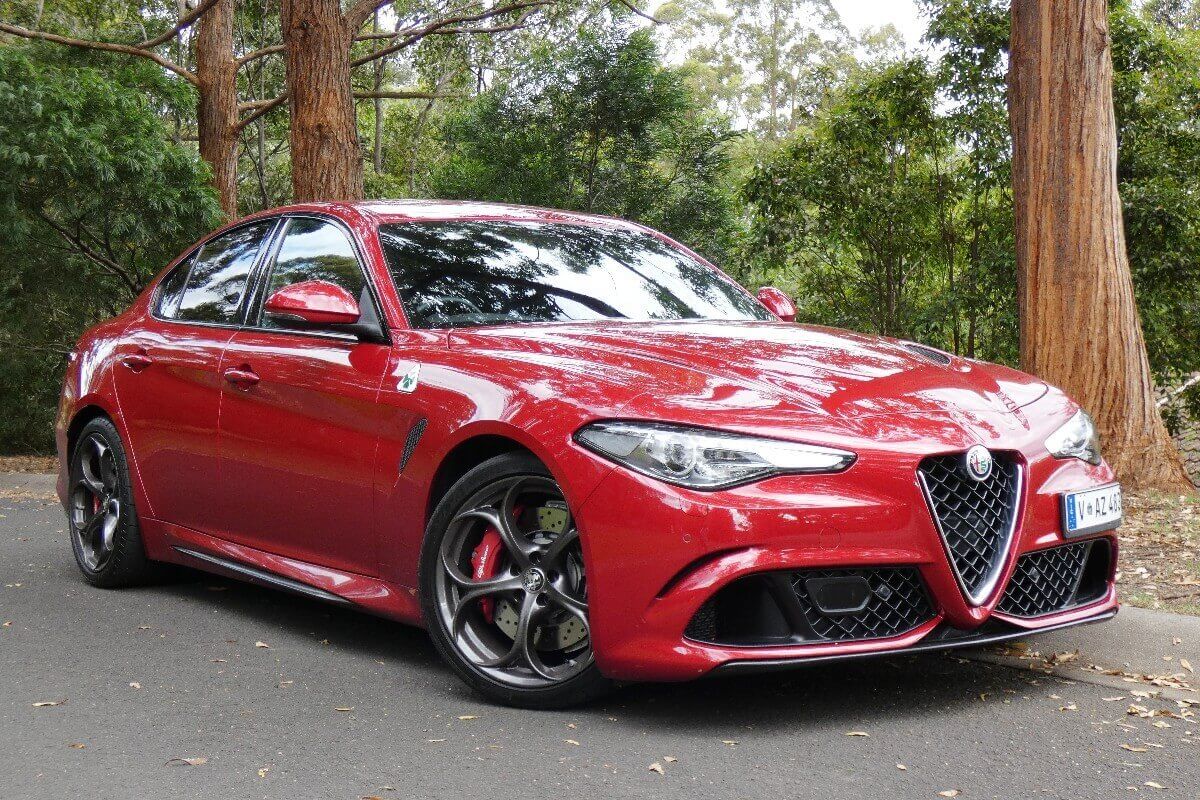 It’s a mouthful, that’s for sure, but the Alfa Romeo Giulia Quadrifoglio is just one of those cars that will take your breath away.

Whether that’s struggling to get in and out of the low slung machine, or being slammed back in the seat as it bellows its way to 100hm/h.

The four-door, twin-turbo V6 sedan is a lover and a fighter, both a looker and a consummate performer — a car without compromise.

Quadrifoglio is designed to go head to head with the likes of the BMW M3 and Mercedes-AMG C63, both of which we’ve been lucky enough to drive. 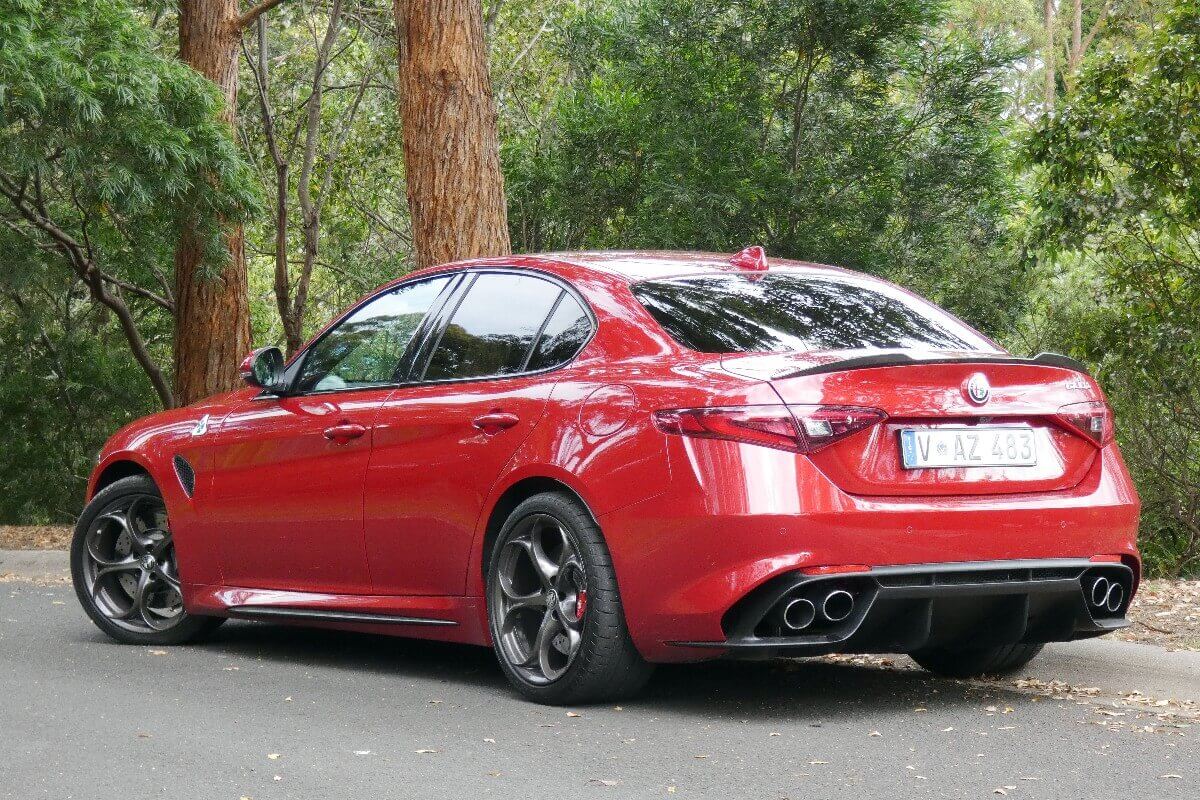 Both the Sport and Veloce feature a 2.0-litre four cylinder turbocharged engine, Sport with 140kW and Veloce with 206kW.

Quad ups the ante with a 2.9-litre twin-turbo V6 that pumps out a thumping 375kW.

Even more mind-boggling is the GTA and GTAm versions, both with 397kW of power — but they’re silly money.

Black or yellow brake calipers are a mere $1000.

Quadrifoglio is distinguished by a different front bumper, with carbon-fibre splitter and larger air intakes for the intercoolers as well as brakes.

Sideskirts also feature carbon-fibre inserts and the bonnet has two cooling outlets for the engine bay and there are gill-style outlets either side at the front to allow air to escape from the wheel housings.

And let’s not forget the green-on-white, four-leaf clover badges and those gorgeous clover leaf wheels. 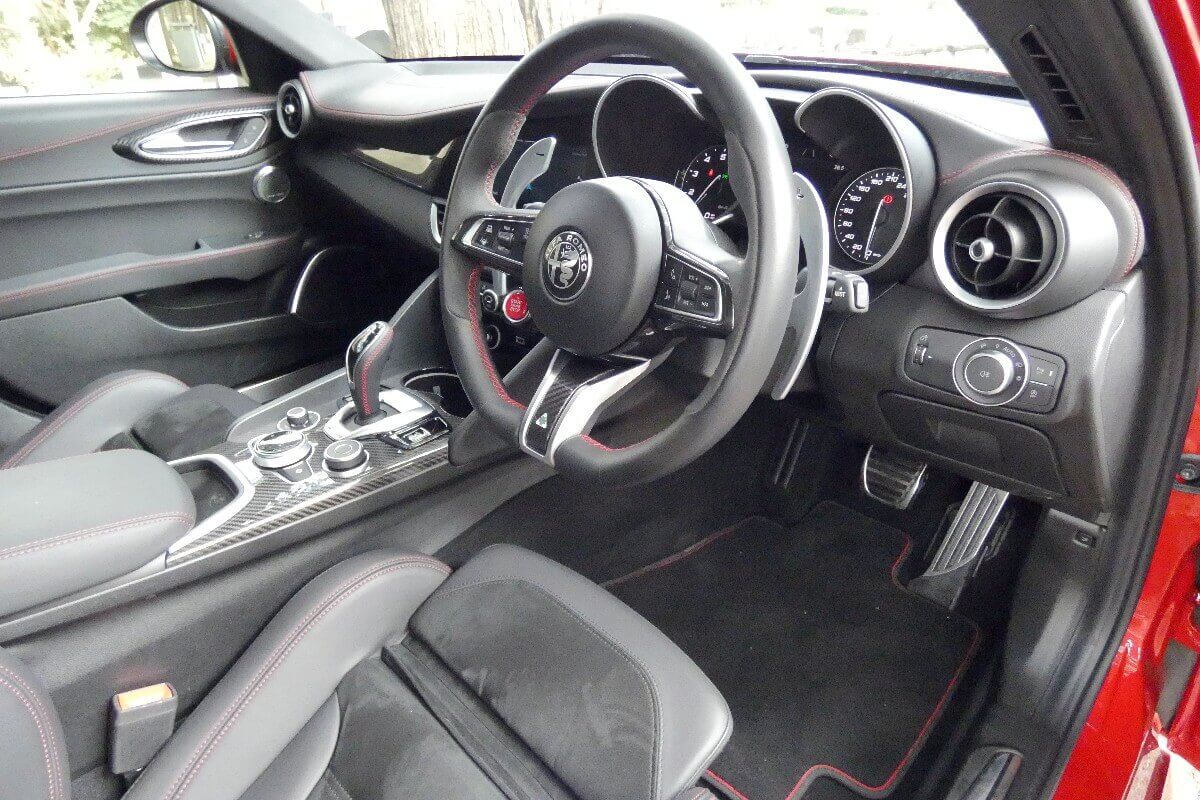 Firing up the Quad for the first time, the bark from the four tailpipes is pre-emptive.

It felt quick from the get go, even before I’d checked the specs to see what it actually cranks out.

To put this in perspective, that’s significantly more power than pinnacle of the HSV range, the E Series GTS which in its final form pumped out 325 killer wasps.

That’s impressive, even more so given the Alfa is smaller and lighter, with a carbon-fibre roof, bonnet and rear spoiler to help trim the puppy fat.

Winner of numerous awards, the Quadrifoglio set a new lap record for a sedan at the Nurburgring, with a time of 7 mins 39 seconds.

That was the manual — the auto trimmed the figure to 32 seconds.

The all-aluminium engine was reportedly developed exclusively for the Quadrifoglio by Ferrari.

The turbochargers are single-scroll units, that have been integrated into the manifold, with water-charge air coolers.

It has side-mounted direct fuel injection, with maximum turbo boost of up to 2.4 bar.

The car is fitted with a torque vectoring diff to help put power to ground and can send up to 100 per cent of torque to either rear wheel.

Without getting any further into the technical nitty gritty, Quad dispatches the dash from 0-100km/h in just 3.9 seconds, with a lofty top end of 307 km/h.

To help keep the fuel bill under control, the drivetrain also incorporates auto engine stop-start and cylinder deactivation, the latter shutting down three of the six cylinders when not required.

It drinks the good stuff and with a claimed fuel consumption of 8.2L/100km, we were getting 10.5L after more than 530km of mixed driving.

Unless you’re going to track the car, however, Dynamic offers everything required and most buyers will almost certainly choose this mode.

The ability to modulate the active suspension, between sport and a softer ride — bears some scrutiny.

The funny thing is, though it feels too busy in the softer mode, too twitchy and unable to settle — so which switched back to sport.

The throttle is if anything overly responsive, even jerky at times, while steering is super direct and the brakes bite hard and fast (they need to).

Under hard acceleration the rear tyres manage to break traction despite the electronics, even with fat 285 Pzeros on the back.

Stunning looks are matched by a stylish interior, trimmed in a combination of aluminium, carbon fibre, natural leather and Alcantara.

The dash flows in a swoosh across the cabin, dominated by two bulging analogue instrument dials for the driver and some might say old-fashioned inset infotainment screen.

Kia Seltos: Let me be blunt

Importantly, a small information panel between the two dials can display a digital speedo and the current speed limit. Grazie mille.

At 8.8-inches the touchscreen is not exactly large, understandable perhaps in a performance-focused machine — but that means a small rear view camera (and to be honest, I don’t trust it, or more specifically — I wouldn’t rely on it).

Sadly, we didn’t get to take the car to the track, but the driver of a VW Golf R Wolfsburg edition got the shock of his short life when he lined us up at the lights.

It wasn’t even close, even though he got going first. 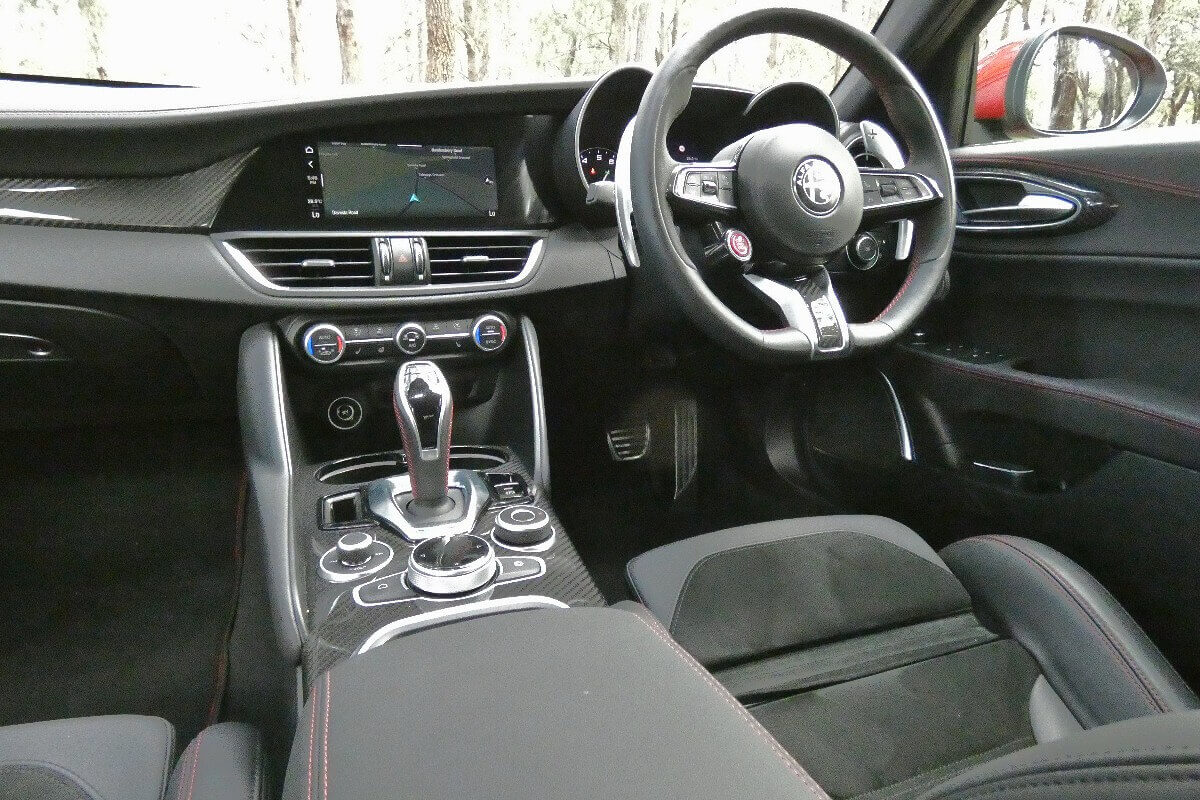 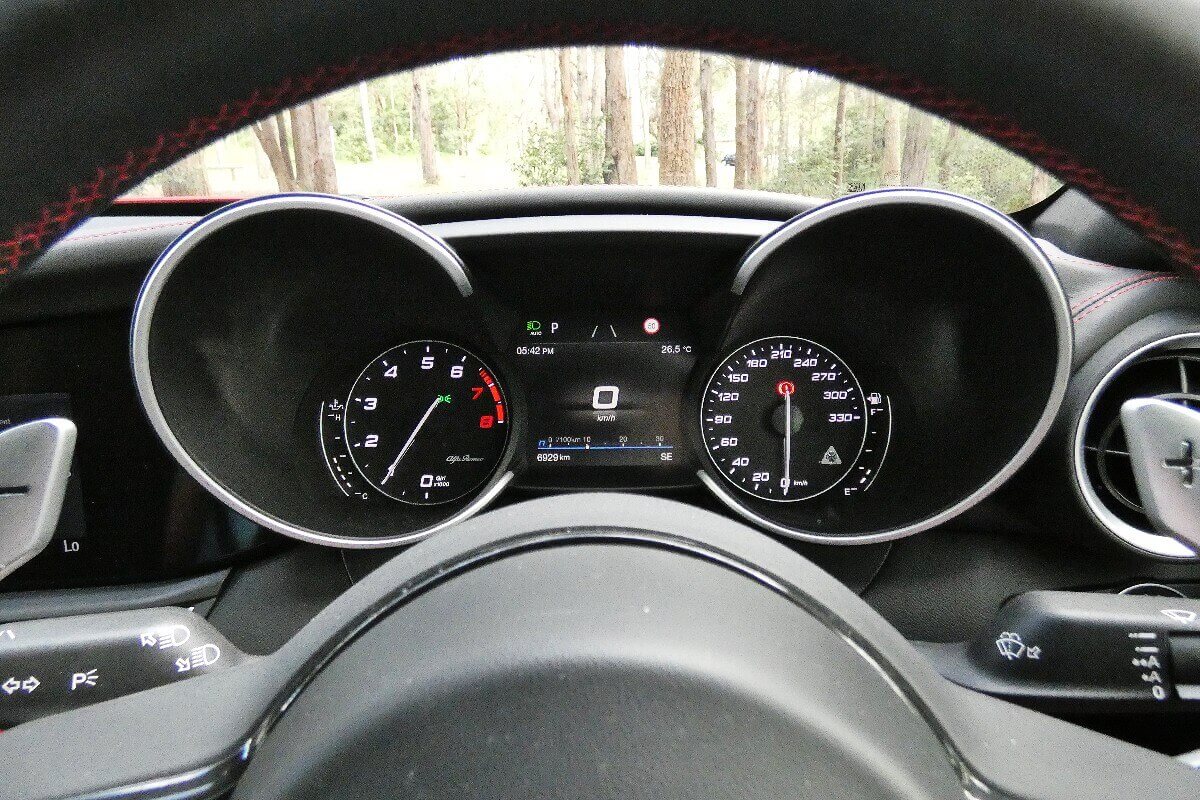 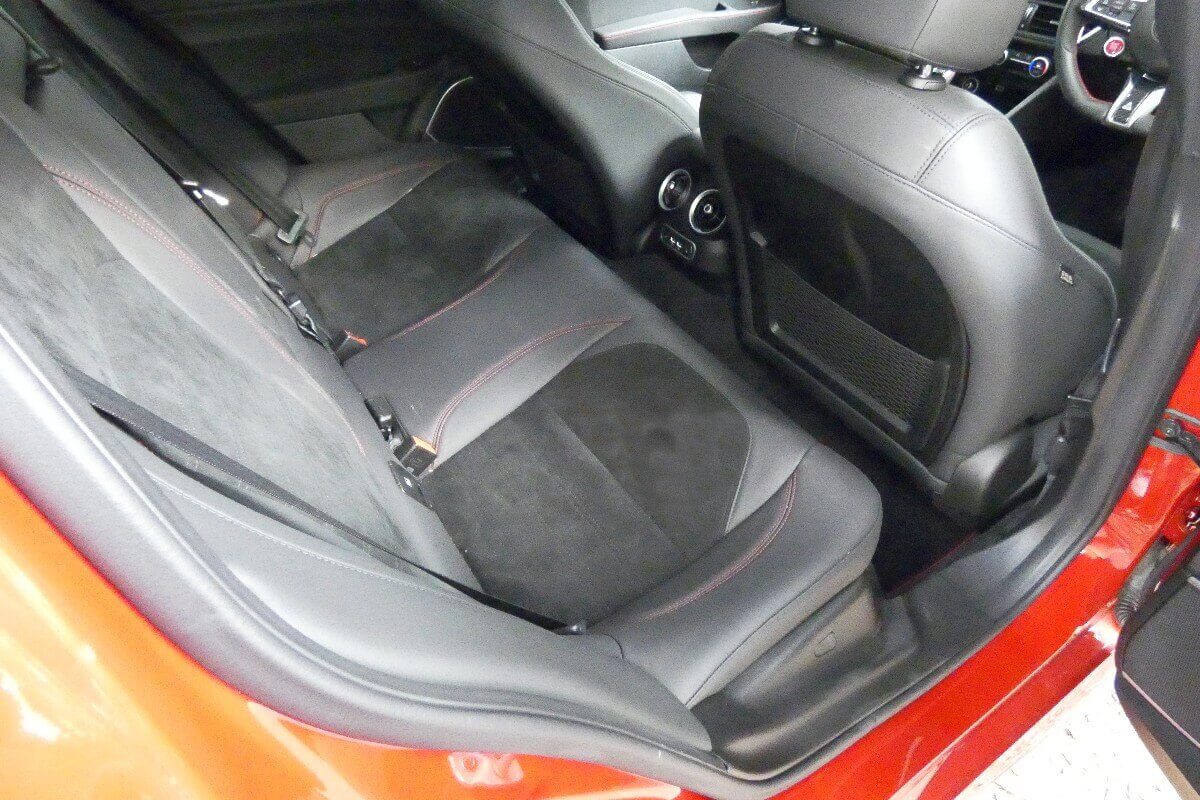 Alfa Romeo Giulia Quadrifoglio (I cut and pasted this lot so I didn’t have to key it in all over again) is an impressive motor car.

Stunning yet understated looks, top shelf performance, and an engaging drive experience will keep you coming back for more.

Unfortunately, this is offset by the mechanics of owning and looking after a vehicle which doesn’t rate very highly in the practicality stakes.

If you can live with these things and can afford the three-figure price tag, then go for it — you won’t be disappointed (trust me). 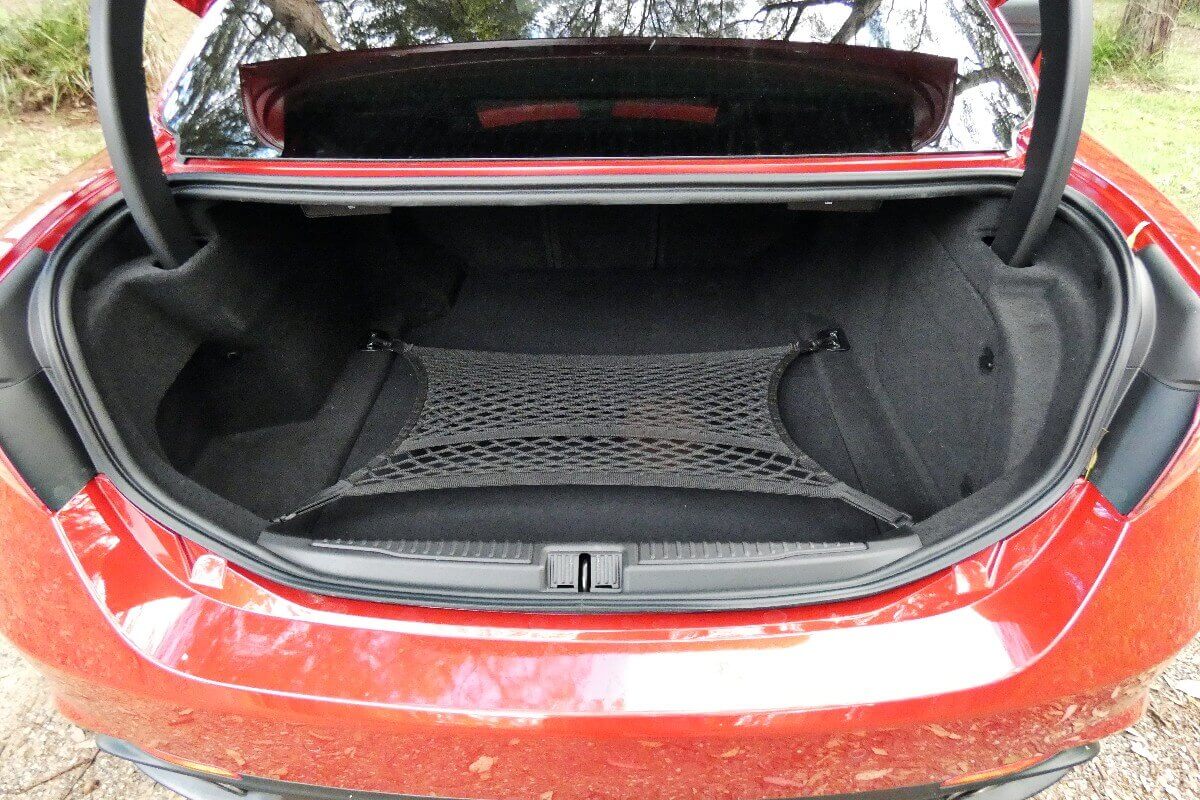 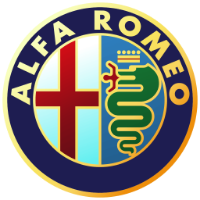 Check out deals on the Alfa Romeo Giulia Quadrifoglio