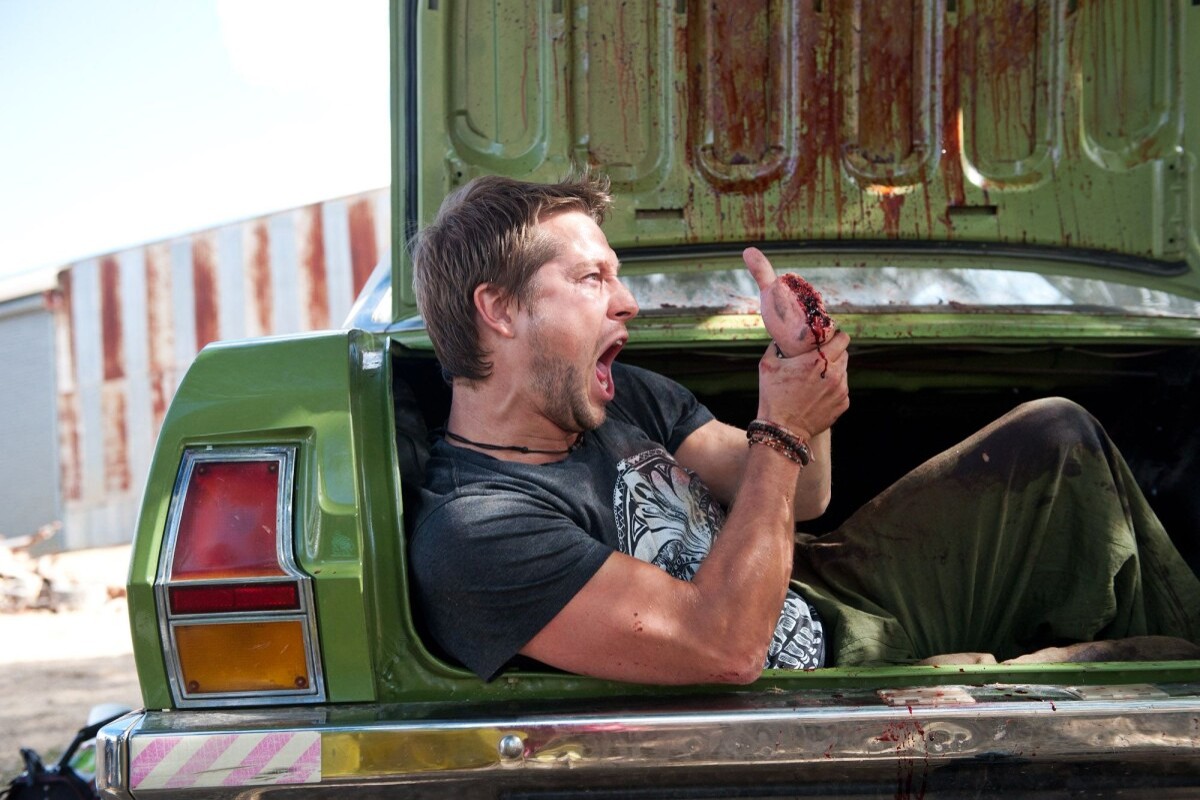 A truck driver comes across the scene of an accident.

He finds the driver dead at the wheel. Rather than phone for help, he drags the body out of the wreck and sticks it in the back of his truck.

The truckie is Reg Morgan, who together with brother Lindsay, run a fledgling fertiliser business — Morgans Organic “blood and bone fertilizer”.

Minutes later he comes across three young adventurers, whose car has broken down — two blokes and a girl.

Reg drives on past, but then changing his mind, returns and offers them a ride.

The girl gets to ride up front with Reg, while the two blokes are consigned to the back with the smelly roadkill.

The body has been concealed behind bags of fertiliser.

Reg and the girl Sophie strike up a conversation.

Turns out Sophie is a former country girl who was sent away to boarding school.

Reg offers to take them straight on to the festival, but then changes his mind, remembering that he needs to pick something up.

Turns out roadkill is not the only thing that goes into the Morgan’s fertiliser.

Released in 2012, 100 Bloody Acres, is one of those delightful, low budget films that only Aussies know how to make — a mix of horror and black humour.

Written and directed by brothers Colin and Cameron Cairnes, it has been described as “the best low-budget horror comedy since Shaun of the Dead.

The film stars  Damon Herriman and Angus Sampson as Reg and Lindsay (Reg Lindsay – get it?), along with Anna McGahan as Sophie, Oliver Ackland as her boyfriend James and Jamie Kristian as James’ mate Wes (with whom Sophie has been having a bit on the side).

Herrman is probably best known for his portrayal of Dewey Crowe in Justified, while Sampson is known for his appearances in the Insidious paranormal chiller Insidious film series which he co-developed with his mate Leigh Whannell.

Once they get to the farm, Reg and Lindsay overpower the trio and it looks like they are destined to go through the mincer along with the body that Reg picked up.

As we find out, it isn’t their first rodeo.

The pair processed a group of charity volunteers who crashed and died in a nearby road accident.

Her company Cyan Films, became attached to the project just prior to the Cairnes brothers winning the Horror-Thriller category for scriptwriting at the 2010 Slamdance Writing Competition.

100 Bloody Acres is available to watch on ABC iView.

CHECKOUT: Godless: Where all the men are dead or dying

It’s not going to win an Academy award, but 100 Bloody Acres  is great entertainment if you’re looking for something to watch.